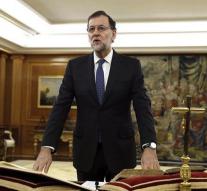 - Spanish Prime Minister Mariano Rajoy announced Thursday his new cabinet. Many ministers remain in the same place as during his first government, but the new team of fourteen ministers (including the prime minister) has six new faces. Five ministers are women.

Rajoy has the parliament given the chance again to lead a government, but he lacks a majority in the Spanish parliament. Now, he must compromise to get parliamentary support.

Rajoy of the conservative People's Party (PP) was prime minister in late 2011. The PP lost the majority in 2015. The second cabinet Rajoy comes provisionally end the political stalemate that has lasted ten months.