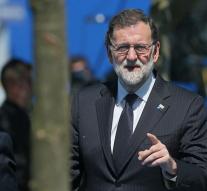 madrid - Spanish Prime Minister Mariano Rajoy himself has to testify in court in a corruption case involving former party members. The government leader wanted to stay out of court or testify through a video link, but the court rejected it on Tuesday.

According to Spanish media, the 62-year-old prime minister of a minority government must now testify on July 26 as a party leader of the People's Party (PP). He is not suspicious or accused of anything. In the corruption case-Gürtel, businessmen and ex-members of the PP are accused of abuse of power, corruption and tax evasion.