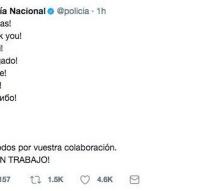 madrid - The Spanish police have expressed their gratitude for all help in the search for Younes Abouyaaqoub (22), and also in Dutch: 'Thank you!'

Abouyaaqoub was shot dead by the police on Monday night, who suspected that he had a belt. That was indeed the case, even though the belt was fake.

Previously, the police had asked 'all of Europe' to help with the hunt. Now that Abouyaaqoub has been killed, all twelve suspects of the attack have been arrested or killed.