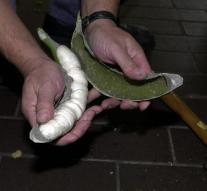 valencia/melaga - Spanish police and tax authorities found 17 kilos of cocaine intercepted who was hidden among bunches of bananas. The drugs were packaged in counterfeit banana peels and flaps of the cardboard boxes in which they were transported. Two men were arrested Sunday, the police said. In a third suspect under investigation.

The trio wanted the drugs through Valencia and Malaga get into the country. Since November last year, was already investigating the smugglers, when police encountered 57 imitation banana filled with cocaine. The two detainees are Spaniards of 37 and 57 years old. The third suspect is a 56 year old Italian.