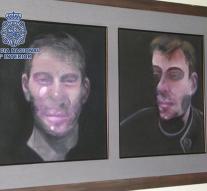 madrid - The Spanish police found three of the five paintings of Irish-British painter Francis Bacon, stolen in 2015. The sheets worth about 25 million euros together disappeared from the house in Madrid of a friend and heir to Bacon (1909-1992).

In the investigation of theft, the Spanish police have held ten people in the meantime. In January three suspects were arrested and seven more in May. The police did not announce how they got the paintings on track.