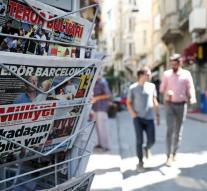 barcelona - The Spanish police say that a group of eight to eleven teenagers is responsible for the two attacks in Barcelona and Cambrils.

The police announced at a press conference that all members of the gang were boys aged 17 or 18. They would all live in the vicinity of Barcelona.