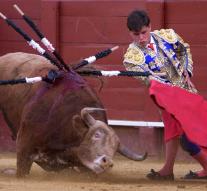 - There are many remarkable resistance in Spain against a plan by the Conservative government to introduce a two-year course in bullfighting at state schools. At the Ministry of Education a package with more than 430,000 signatures was delivered against the plan.

The course can be followed voluntarily by students from fourteen to seventeen years. The classes provide 2000 hours of training, both theory and practice. The practical part includes, for example lesson in cleaning the complicated costume of the toreador, including the cape.

The animal rights organizations were, according to The Guardian raft with their opposition to the plans to " to train fifteen year olds in the torture of animals ". Although the opposition to bullfighting is old and growing, is fighting hard to eradicate. This form of popular entertainment is except in Spain in southern France, Portugal and Latin America.