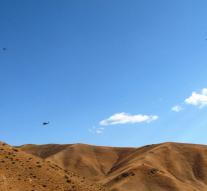 barcelona - A helicopter of the Spanish army on Thursday crashed into the Atlantic Ocean. On board were three soldiers. It is according to the Spanish Ministry of Defence unclear how they are ready for it, writes the Catalan newspaper Ara.

The aircraft was en route to the Canary Islands, march crashed by unknown causes at more than 800 kilometers from its final destination. A Moroccan rescue helicopter was sent to the scene of the accident. Rescue workers searched for survivors late Thursday.