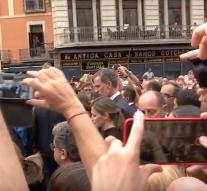 barcelona - VIDEO- King Felipe and his wife Letizia put a heart under the belt on Saturday the victims of the attack in Barcelona. The Spanish royal couple visited the two hospitals where the most injured were nursed.

In the evening, the king and queen brought flowers to the mosaic of the artist Joan Miró on the Ramblas, where the van at which an IS terrorist came in on the hikers came to a halt. They were in company of Mayor Ada Colau and Carles Puigdemont, the president of the Autonomous Region of Catalonia.

The spot on Barcelona's most famous promenade is now a sea of ​​flowers and candles. The royal couple was greeted by the crowd with applause and hearts. Again, the 'No tinc por' sounded Catalan for 'I'm not afraid'.

Felipe and Letizia went to the Hospital Del Mar, which is near the Ramblas. Before they visited the victims, they talked to doctors and nurses about the treatment of the injured. Then they visited the Saint Pau Hospital de la Santa Creu. Twelve of the fifty injuries treated in Barcelona are still at risk.

King Felipe interrupted his holiday after the attacks in his country. On Friday he attended a memorial in Barcelona at the Plaza de Catalunya.