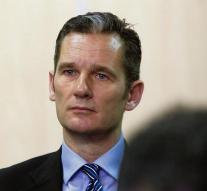 - The court decided to half past ten on the fate of the brother of the Spanish king.

Is Inaki Urdangarin, the brother of the King of Spain, this morning or not beaten in chains and discharged directly to jail? The question keeps busy throughout Spain- and all Spaniards are waiting for the court verdict in Palma. They discuss it too. For example, in talk shows, such as the national broadcaster RTVE, and on the radio. Or just in the streets, as in Barcelona, ​​on the benches in the parks. As Albert Alvarez says indignantly: 'prison sentences and anti-corruption laws still apply equally to members of the royal family? Or maybe right for them: they have to set a good example? And the court has yet condemned them? How can we have confidence in this country as the leaders or members of the Royal Family have a different treatment? How bad is it when someone puts millions in his pocket, and a part of the people for whom the money is actually intended hungry? '

He thus expresses the opinion many Spaniards. All Spain was indeed shocked when ten years ago the matter, which became known as 'caso Noos' came to light. Which was to the effect that Inaki Urdangarin, the husband of the Infanta Cristina, and his business partner Diego Torres strike at least six million of public money earmarked for public events in their own pocket. The indignation this was great- especially since Spain in subsequent years ended up in a deep crisis. And so is all over the country this morning glued to the tube, and at half past eleven clear what the immediate fate of Inaki Urdangarin, the brother of King Felipe VI- and the once popular former international handball.

The court last week sentenced him in caso Noos' to a prison term of six years and three months for fraud, money laundering, embezzlement of public funds and abuse of his royal connections. Against his business partner Diego Torres demanded a prison sentence of eight and a half years. But the question is what happens to the two happen pending the appeal, that the coming months will serve in the Supreme Court.

In the worst case the court decides later at half past ten behind closed doors that the two immediately be beaten in handcuffs- and disposed of in a police car to a Spanish prison. According to several Spanish media this will go to a prison complex in Badajoz, in the Extremadura province. But Spanish jurists consider it unlikely, given the personal circumstances of Urdangarin and his former companion. There is also the possibility that Urdangarin and Torres get house arrest, or that their passport is taken away to

prevent them from leaving the country pending the appeal. In that case they will have to sign in order to serve his sentence in the event that the Court confirms this. There is also the possibility that they have to report periodically to the court.

Likely anti-corruptieaanklager Pedro Horrach- if he does not ask for the immediate imprisonment of the two- of seeking to 'avoidable' imprisonment 'in bail. This means that Iñaki Urdangarin and Diego Torres will have to pay a hefty sum to await the final decision of the Supreme Court in freedom outside the walls of the cell.

This scenario seems most likely. Also Horrach has repeatedly hinted in recent days that take into account the personal circumstances of the accused.

It welcomes many in Spain bitter. As Natalia Moreno puts it: 'Why do these criminals should be treated differently than others? Because those are the- whether they belong to the Royal Family or not. The government can say: everyone is equal before the Spanish law. But if it was going to be a factory worker, he had already been behind bars. '