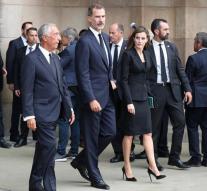 barcelona - In the Sagrada Familia in Barcelona, ​​the victims of terrorist attacks have been commemorated on Sunday.

The famous king of the world, Felipe and Letizia, Prime Minister Mariano Rajoy, Portuguese President Marcelo Rebelo, took part in the Sousa and many other politicians, such as the Mayor of Barcelona, ​​in the world famous Antoni Gaudi church.

The mis 'for peace' was led by the Archbishop of Barcelona, ​​Juan José Omella. The commemoration began at 10 o'clock in the morning with solemn organ music. At the attacks in Barcelona and Cambrils, 14 people were killed, 120 injured.