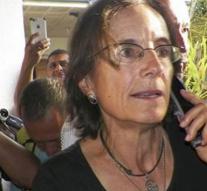 bogotá - The Spanish journalist Salud Hernández was also abducted last year in the area where the team of Spoorloos disappeared. The ELN held Hernández for five days. The correspondents of the Spanish newspaper El Mundo are angry that the guerrillaes have reappeared. 'There is no justification for kidnapping two Dutch journalists. The ELN continues to commit the same crimes, 'Hernández said on Twitter.

The Spanish correspondent, who also writes for local Colombian newspapers, was abducted on May 23 last year and held for five days by the extremist club ELN. Eventually she was released on 27 May. Two Colombian journalists who were killed at the same time, Diego D'Pablos and Carlos Melo, were released a few hours later.

'It's very good with me,' said Hernández after her release. I thank everyone who has prayers for me. There's nothing else going on with me. 'The journalist disappeared in the village of El Tarra, where she made reports about the many coke plantations there. She was robbed of her equipment by a group of men. 'Then a motorcyclist came up, who said I would get my stuff back and that I would get an interview. '

Then she was taken to the Catatuba area. 'They said I'd stay for a few days,' she said later on the radio. 'They brought me clothes- and after that I was taken from place to place. 'At only one place she slept two nights. 'I was reckless, but I think a journalist should be that too, otherwise we would not get much of our stories. '

Hernandez has always been critical of the FARC and the ELN. She found that peace talks could only be conducted with these organizations if all hostages were released. 'If peace with the FARC is already complicated... With the ELN it is impossible, 'said Hernández.