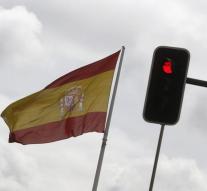 The Guardia Civil has a group of seven people, including three minors, in sight, but has not kept them. The Spanish police can not tell who exactly is behind the action. It may be the Catalan group Dolça Catalunya, which is strongly opposed to a possible breakdown of Spain.

There is still a large group of nationalists in the region who want to part from Spain. A majority of the young people in particular are nationalist.

In response to the Spanish flags, Dolça Catalunya said that nationalism in Spain ended. 'There will be a day when the Catalans will say,' We are sick. ' There will be a new spring on which Catalonia will wake up. ''