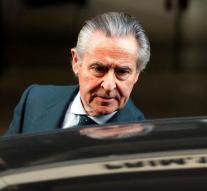 villanueva del rey - The former boss of the major Spanish savings bank, Caja Madrid, Miguel Blesa, was found dead on a South Spanish estate on Wednesday. According to the police, everything indicates that he robbed himself of a shotgun of life on Wednesday morning.

The 69-year-old Blesa was sentenced to six years in prison for fraud and tax evasion at the country's oldest savings bank, the Caja Madrid, in March. Blesa had the lead from 1996 to 2009. The bank eventually ended up in the bank merger bank in 2011.

Blesa was free pending the completion of the appeal in the criminal case. He came according to Spanish media at the beginning of the night on a farm north of the city where he Córdova hunt more often. After breakfast with friends present, Blesa retreated.