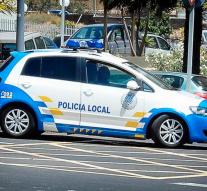 barcelona - Spanish police have broken up a gang that had specialized in robbing tourists. The criminals posed as agents. They kept their victims standing and for example asked for identification or told to investigate stolen money, jewelry and other valuables. Then they robbed the tourists of exactly that kind of stuff.

The gang hit alone some forty occasions on roads in the vicinity of Barcelona, ​​the government of Catalonia reported Wednesday. They also probably made victims in the area of ​​Madrid and Valencia. Especially small groups of tourists were caught.

In total have been arrested in Catalonia and Valencia eight people, including the alleged leaders of the gang. Most of the suspects are from Iran and Pakistan.