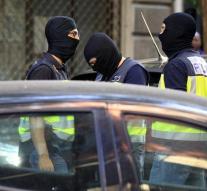 madrid - The Spanish police arrested a 32-year-old Moroccan terrorist suspect, which is described as extremely dangerous. A large collection of extreme Islamic lectures was discovered with the man, plus a manual for suicide attackers.

The suspect was arrested on Wednesday morning during an action in the center of Madrid, along with two other Moroccans of 38 and 33 living in the same apartment.

According to the Spanish authorities, the terrorist suspect had a profile similar to that of terrorists who attacked Britain and France. He would be busy recruiting people to attack in Spain.