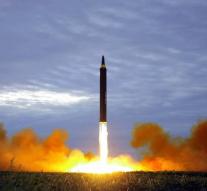 madrid - Spain has understood the North Korean ambassador to completely reject the missile testing and nuclear program of the communist regime in Pyongyang. The Ministry of Foreign Affairs has therefore decided to reduce the number of North Korean diplomats in Madrid. How many staff are dispatched, was not disclosed.

The UK also called on the North Korean ambassador on Thursday because of the launch of a ballistic missile over the Japanese island of Hokkaido. 'The reckless actions of North Korea violate numerous UN Security Council resolutions and threaten international security. I want the regime to stop and return to the negotiating table, 'said Minister Mark Field.