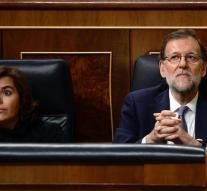 - The Spanish Parliament grants outgoing Prime Minister Mariano Rajoy no additional term. Rajoy had the Cortes asked for their trust, but lost as expected, the confidence vote Wednesday.

Rajoy was supported by his conservative People's Party (PP), the liberal movement Ciudadanos (Citizens) and a Member of Parliament of the Canary Islands. Together that accounted for 170 of the 350 seats and thus insufficient to govern.

The Prime Minister hoped that the social democratic PSOE, or at least a squadron of that party would give him the benefit of the doubt to break the deadlock in which Spanish politics finds since late last year. But the entire PSOE voted against a new government Rajoy.


Rajoy gets Friday again no majority behind him, then Spain is heading off to new elections- the third elections within a year.