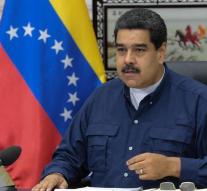 caracas - Spain must halt racism and fascism in the country. That has prompted Venezuelan President Nicolás Maduro to spell the Spanish king Felipe VI Wednesday, the Spanish newspaper El País reported. Maduro, in his opinion, is very displeased about the way in which his ambassador was treated in Spain.

Ambassador Mario Isea was in protest on a Friday protest in Madrid, aimed primarily at Bolivia's government. About two hundred people were up to protest against the violation of human rights. However, other South American embassies were also blocked.

According to Maduro, Spain, and then the king in particular, must take action and conduct an investigation. He also addressed the Spanish Prime Minister Mariano Rajoy. 'Why did you allow such violence against our ambassador?' He asked angryly.