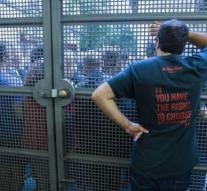 madrid - The Spanish police have already closed 92 improvised polling stations in Catalonia. That was reported by the Ministry of the Interior on Sunday afternoon. Confrontations between the riot police and voters affected more than 460 people, including 12 agents.

At least three people have been arrested, including a young girl. The detainees are suspected of ignoring instructions and abuse.

The authorities in Catalonia previously knew that hundreds of civilians were injured by collisions with the police.