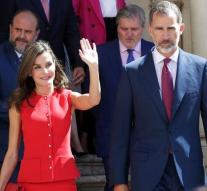 madrid - Spain celebrates the National Holiday Day on Thursday during a deep crisis of separatism in Catalonia. King Felipe VI and Queen Letizia take part in ceremonies on a square in northern Madrid from 11.00, together with the entire government team.

The main part is a military parade every year. This year, the national police also take part.

On Wednesday, Prime Minister Mariano Rajoy spoke in parliament about the biggest threat to Spanish democracy for forty years. Radical separatists have attempted to separate Spain from Spain with their small majority in the Catalan parliament this month.

State champion Carles Puigdemont would call independence on Tuesday in Barcelona. He did not do so with so many words, but Rajoy threatened to intervene next week in Catalonia and board.