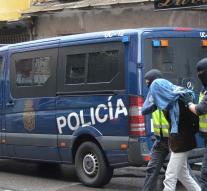 - The Spanish police on Tuesday arrested three Moroccans suspected of planning an attack in the name of Islamic State. According to Interior Minister Jorge Fernandez Diaz was the trio are about to carry out an attack.

The Spanish newspaper El Pais writes that the three suspects are around 25 and for several years lived in Madrid. Police are still engaged in house searches. It is unclear how the three would carry out an attack.

According to El Pais is currently being sixty people stuck in Spain due to their alleged links to Islamic State.