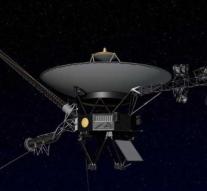 washington - The American spacecraft Voyager 2 is about to leave our solar system. After more than forty years of continuous flying, he has come to the edge, almost 18 billion kilometers from the earth. In a while, the probe enters the endless space between the stars. When that happens exactly, it is unpredictable, because scientists do not know exactly what the universe looks like there.

The Voyager 2 still works. It has a speed of more than 55,000 kilometers per hour and sends signals back to earth. The probe registers, among other things, the particles that it encounters along the way. Since August he measures more cosmic radiation. These are particles that come from outside our solar system. This indicates that the Voyager is in the transition area.