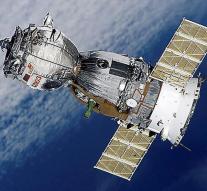 moscow - After a two-day trip is the modernized Soyuz capsule with three crew members Saturday morning arrived at the International Space Station (ISS). Reported that the US space agency NASA on Twitter.

Although it can in six hours, the Soyuz capsule did this time two days on the journey to the outpost of humanity, 400 kilometers from the earth. During the 34 laps around the earth, the astronauts had all the time to extensively test the new capsule.


The capsule was left Thursday from Russia's Baikonur base in Kazakhstan.