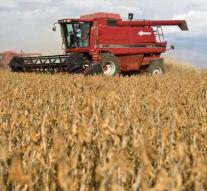 - China prepares retaliatory actions after import duties on, among other things, its steel, solar panels and washing machines. American soy farmers can expect price increases for their exports.

Hedge funds that speculate on the price are already preparing for the impending tariff war around the legume, as shown at the Chicago Stock Exchange. For the Americans, China is the largest buyer of soybeans.

The country buys for $ 14 billion in soybeans from the American Midlands, but has been complaining for some time about the agricultural subsidies that would make the beans too cheap.

China has already struggled against imports of American sorghum, also known as kaffir ears. That is widely used for Chinese alcohol production. It is the fourth most traded cereal worldwide.

According to news agency Bloomberg, the Chinese have been preparing new hard interventions since January for the taxes that President Trump wished to answer for his American farmers.

The Americans are struggling with surpluses in soy and wheat, prices on the world markets were falling. The Beijing step will undoubtedly lead to further countermeasures, according to sources at the Ministry of Commerce.

Soya is crucial in this: the import of the beans has risen sharply in recent years because of the need of Chinese dairy farmers for protein-rich food for the animals. Soy contains about 35% protein.

In January, China purchased 8.48 million tons of soy, 11% more than last year in the same weeks. On Thursday, the ministry increased its demand by another 300,000 tons.

This followed the restriction that Trump imposed on the import of cheap solar panels and washing machines from Asia. The final decision to tax extra US imports would only be taken by President Xi Jiping.

Price actions follow back and forth. According to the Commodity Specialized Commonwealth Bank of Australia, China's price increase for soy would be a significant blow that will determine prices for American farmers.

Earlier, the Chinese looked like Brazilian soy, which have the greatest crop in their history on the fields. Brazil exports 15 million tons annually. Argentina is the largest exporter with 31 million tons, but has been struggling with high temperatures recently. That led to the Chicago Stock Exchange to price rises.