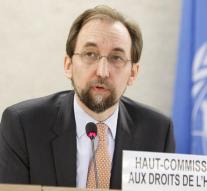 geneva - Government forces in South Sudan have executed civilians and participated in group rapes of women and girls during the fighting last month in the capital Juba. That accusation is Thursday of the High Commissioner for UN Human Rights, Zeid Ra'ad Al Hussein.

According to the commissioner, the military had mainly provided by members of the Nuer people. Forming a minority in southern Sudan after the Dinka tribe of President Salva Kiir.,, While some civilians were killed in crossfire, others shot by government soldiers who had coined specifically to people of Nuer, '' Zeid said.,, The battle also resulted in widespread sexual violence, including gang rape by soldiers in uniform and in civilian clothes. ''