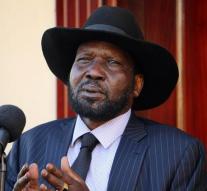 juba - The authorities have arrested seventeen people in South Sudan who are suspected of an attack on a hotel in the capital Juba. South Sudan leader of the research said Wednesday that most detainees were soldiers.

The attack took place in July at the hotel in a period of heavy fighting between soldiers who were on hand to President Salva Kiir and troops who supported his rival and former Vice President Riek Machar. According to the South Sudanese investigator were between fifty and a hundred people involved in the attack on the hotel.

Eight suspects of the attack would be found guilty of rape and eight others to steal vehicles. A seventeenth suspect could have injured someone.