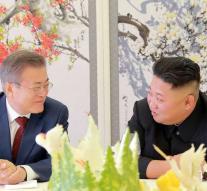 seoul - Many South Koreans want the sanctions against North Korea to be relaxed to restart talks about the phasing out of the nuclear program there. This is shown by a survey conducted by the National Reunification Office.

Of the thousand respondents, 64 percent stated they were in favor of easing the sanctions. After three meetings between the leadership of North and South Korea and a historic meeting between the US President Donald Trump and the North Korean leader Kim Jong-un, the meeting is now almost stopped. Pyongyang demands that the sanctions be relaxed before it takes serious steps to get rid of its nuclear weapons.