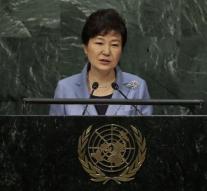 seoul - 42.5 million voting South Koreans go to the polling station on Tuesday (local time) to elect a new president. This is the follow-up of Park Geun-hye, the first female president of the country, who received a majority of voters at the end of 2012.

Chancellors are former command of Moon Jae-in (64) and former software entrepreneur Ahn Cheol Soo (55). In the polls, Moon comes up as a winner.

Former President Park had to resign due to corruption and abuse of power. She has been formally accused and can be sentenced to life imprisonment.