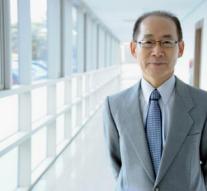 - The South Korean Hoesung Lee was Tuesday elected the new president of the UN Climate Panel . The Intergovernmental Panel on Climate Change (IPCC) , the mitigation of the climate problems such as global warming.

Representatives from 195 countries took in the Croatian city of Dubrovnik vote. Hoesung Lee, a professor in the Economics of Climate Change , prevailed over five other candidates. He is the successor of the Indian Rajendra Pachauri .