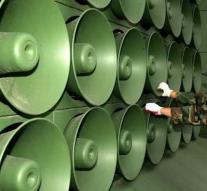 seoul - South Korea temporarily stops the loudspeaker propaganda at the border with North Korea. The move should serve to 'reduce military tensions between the South and the North and create a climate for peaceful talks.'

It is the first time in two years that the speakers are silent. Whether the neighbor also stops the propaganda is not clear.

The heads of state of both Koreas will meet Friday in the border town of Panmunjom. North Korea announced last weekend to immediately stop nuclear testing and missile testing. According to leader Kim Jong-un, his country no longer has to carry out nuclear tests or ballistic missile tests because it has completed nuclear weapons.