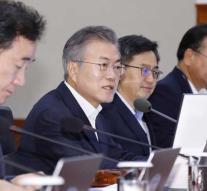 The leaders are expected to meet next month. It is the first time since his appointment as president that Moon travels to Pyongyang, although he already crossed the border symbolically. That happened when he met Kim in April in the border village of Panmunjom.

The envoy's visit would also serve to discuss possibilities for smoothing the stiff discussions about the denuclearization of North Korea. US President Trump recently decided to cancel a planned trip from his foreign minister to that country. Too little progress would be made.