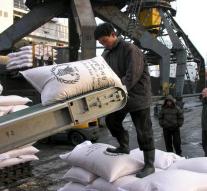 seoul - The South Korean government has decided to send aid to North Korea. It is a package worth about 6.7 million euros. The last time Seoul provided North aid was the end of 2015.

South Korea provides assistance through UN organizations such as the World Food Program and UNICEF. This includes food for children and pregnant women. Seoul also sends vaccines and medication to the northern neighboring country.

'We have consistently said that we wanted to regulate humanitarian aid for North Korea in view of the bad conditions under which children and pregnant women live there,' said Minister of Unification Cho Myong-gyon. 'That is independent of political issues. '

The timing of the decision is striking as the tension on the Korean peninsula continues to increase. North Korean minister Ri Yong-ho compared Donald Trump with a barking dog on Thursday. That he did after the US President warned that he might be forced to completely destroy the North. '