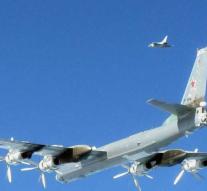 seoul - The South Korean air force reports that it has intercepted two Russian fighter jets on Friday, which have violated four times the airspace of the Asian country. Russian aircraft flew along the South Korean east coast and the waters off the southern island of Jeju.

The Department of Defense of South Korea has reported a complaint about the violation to Russia. The Russian planes would be TU-95 bombers, reported Yonhap news agency.

It is the fourth time this year that the airspace of South Korea has been violated, but it did not happen that this happened several times in succession. Chinese fighter jets flew three times this year over South Korean territory.