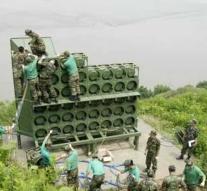 seoul - The South Korean army is now completely removing the propaganda speakers on the border with North Korea. The work will start on Tuesday, message from the state press agency Yonhap.

Seoul had already turned off the speakers in the run-up to the summit between President Moon Jae-in and the North Korean leader Kim Jong-un. According to Yonhap, the men agreed, among other things, to stop the 'hostile acts against each other'. That is why the South is now dismantling the sound system.

The Ministry of Defense did not want to say how many loudspeakers were installed at the border. South Korea previously used the devices to send critical messages about the North Korean political system. Also 'K-pop', South Korean pop music, was broadcast via the installation.