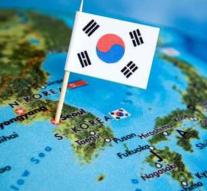 South Korea is officially still at war with its neighbor North Korea, but recently the countries are looking for a closer match. Presumably, the judgment of the Supreme Court is linked to the better relations.

According to South Korean media, thirteen conscientious objectors are still stuck for the time being. The 58 that are released must provide alternative service. According to a new bill, it will be a maximum of 36 months. Military service takes eighteen months.