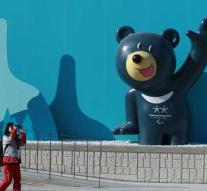 seoul - South Korea has forbidden 36,000 foreigners to enter the country prior to the Olympic Games. Among them are people who would have links with extremist groups such as Islamic State. The measure is intended to guarantee safety during the Games, said news agency Yonhap Monday.

Yonhap cited a South Korean parliamentarian who said that the security service cooperates with foreign intelligence services to intensify identity checks of foreigners. It is part of an anti-terrorism plan for the Games. About 60,000 security guards will secure the Olympic locations.