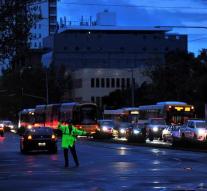 - The entire southern Australia without power as a result of violent storms were accompanied by heavy thunderstorms. Energy companies expect the repair might take another 24 hours. Almost all 1.6 million residents of the state of South Australia are devoid of electricity.

The state government has hastily set up an emergency center. Hospitals and other care providers are the first to be helped to power. Residents are advised to buy radios with batteries so that public opinions to be followed. One of the consequences is that the mobile telephone traffic gradually fails everywhere because the masts quickly get their necessary current stock.

Storm and Storm have include a large power station in Port Augusta made unusable.