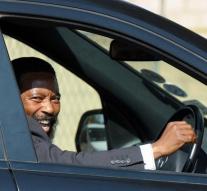 - A South African king, the cell needs for kidnapping, assault and arson. The highest court in the land rejected the appeal that the frost had set, reports the BBC.

King Buyelekhaya Dalindyebo belongs to the same ethnic group as anti- apartheid fighter and former president Nelson Mandela, who died two years ago. He is the first monarch to prison must since South Africa became a democracy in 1994.The case relates to a dispute that the King had with some of his subjects, over twenty years ago. South Africa has many other kings and traditional rulers.
NEW