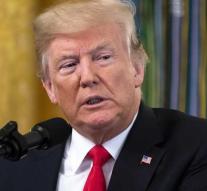 johannesburg - The South African government wants clarification about a tweet from Donald Trump. The American president stated on Twitter that he had instructed his Minister of Foreign Affairs to properly review the 'seizures and expropriations of land and farms and the large-scale killing of farmers' in that country.

Trump's tweet seems to be a reaction to news coverage from Fox News.

There a presenter stated that South Africa makes it possible to steal people's land 'because they have the wrong skin color. 'The South African government wants to make it possible to expropriate land without compensating the owner. This requires that the constitution be adjusted.

The spokesperson for the South African president said that Trump seems to be tweeting inaccurate information. 'We will deal with this issue through diplomatic channels. '