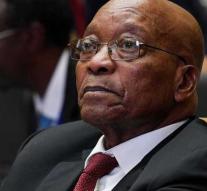 johannesburg - The South African president Jacob Zuma refuses to resign. He was replaced in December as leader of the African National Congress (ANC) after allegations of corruption. Despite great pressure, he does not want to resign as president.

Party bosses from the ANC would prefer that Zuma step down before he has to hold his annual parliamentary speech later this week. He is accused of corruption, fraud, extortion, money laundering and tax evasion. He himself denies all debt.

The allegations go back to the nineties and deal with almost eight hundred payments in an arms deal. Zuma and other government officials would have accepted bribes for the purchase of fighter jets, patrol boats and other equipment, reports the BBC.

If Zuma continues to refuse to leave, the ANC has a problem. The party does not want a power struggle, because there will be elections next year. The party can nevertheless decide to abandon Zuma, as happened with its predecessor Thabo Mbeki.

While the party summit meets Monday, the street in Johannesburg is gathering both supporters and opponents of the president.