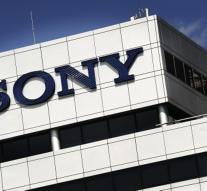 - Electronics manufacturer Sony put in the past quarter profit in the books, helped by a visitor record for the animated film " Hotel Transylvania 2 '. Also strong sales of the new game console PlayStation 4 attracted the Japanese company out of the red.

Net income in the second quarter of the fiscal year, which ran until the end of September totaled 33.6 billion yen (the equivalent of 244 million euro). In the same period a year earlier, Sony suffered a loss of 136 billion yen. The results were above analyst expectations.

Earlier this year, Sony managed to take a different course. The company that was for many years known for its televisions, stereos and other consumer electronics, decided after continued losses to focus more on computer and sensors for cameras and mobile phones.