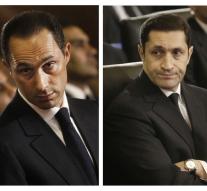 - The two sons of former Egyptian President Hosni Mubarak on Monday freed on the orders of the court in Cairo. The pair is still awaiting an appeal in a case of misappropriation of public funds.

Alaa and Gamal Mubarak would have embezzled millions of euros. They wanted to use money for the renovation of the presidential palaces to renovate their own homes. The court ruled that the possible punishment for the brothers shall not be longer than the time they have been in custody vastgezeten.

Both Mubarak must still stand trial in another case at a later stage, another process that revolves around illegal operations with money.