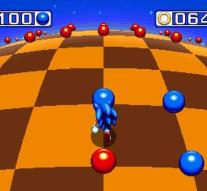 - Where Nintendo has been sending a heroic plumber on the road for years in video games, SEGA does that with a lightning blue hedgehog. Last year, the hedgehog got a downloadable platform adventure called Sonic Mania.

Now here is a more extensive title entitled Sonic Mania Plus. A version that certainly has advantages, but still struggles with the same weaknesses as the previous release.

Sonic is from the first moment the mascot of developer SEGA. The hedgehog has already experienced countless adventures, both in 2D and in 3D. And there was one element central to each part. There is a villain who wanted to crush the world of Sonic and his friends with the help of a number of gems, the Chaos Emeralds. Similarly in Sonic Mania Plus, in which the archrival of Sonic, Dr. Eggman, ruined the world thoroughly.

It's up to Sonic to do something about it. How? By running fast, jumping, collecting rings and rolling like crazy. These are the things that Sonic has been doing successfully for years, just as his opposite pole Mario has been sliding through the well-known colored tubes for years and collecting coins.