Home / World / 'Song festival in Jerusalem? That is not fixed at all ' 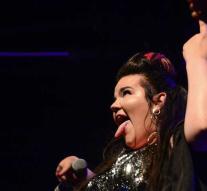 - The Eurovision Song Contest 2019 may not be held in Jerusalem. This said the Director General of the Israeli Ministry of Culture and Sport, Yossi Sharabi, against Israeli media.

He spoke in an answer to questions about canceling a friendly football match between Argentina and Israel. The Argentines canceled at the last minute because they do not want to play in Jerusalem. The city is controversial, because Israel has annexed the occupied Arab part, whereas according to the UN this must become the capital of Palestine through negotiations. The exhibition game would first be played in Haifa, but Israel moved the event to Jerusalem, reported the newspaper Haaretz.

Sharabi warned that the Eurovision Song Contest is likely to get problems in Jerusalem. 'Eurovision in Jerusalem? That is not fixed at all ', according to the top official.

Last month, Israeli Netta Barzilai won the 2018 song festival in Lisbon. As usual, the winning country organizes the next festival. Sharabi's chief, Minister Miri Regev (Culture and Sport) said earlier that it will be in Jerusalem.