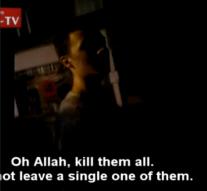 - The boy who called in a video to murder Christians regrets the movie that was made in the Belgian Verviers. The son of a Dutch-Moroccan imam is now on vacation in Morocco, but promises himself when he returns to report next week to the Belgian police.

The teenager denies against the French-speaking broadcaster RTBF that he is a jihadist. He also denies that he called for the killing of Christians. He was referring to his own words on supporters of the regime of Syrian President Bashar Assad.

The seventeen year old boy says to appreciate the fuss about the movie.,, Yes, I understand that with all these attacks. I expressed myself wrong. It will be difficult to restore my image. ''


Belgium wants to turn the minister El Alami Amaouch to the Netherlands. On that soon follows a decision.