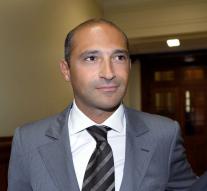 - The eldest son of the French Foreign Minister Laurent Fabius on Tuesday questioned by the police in an investigation of forgery and money laundering. The police also searched his apartment in Paris, reported a source in the court.

Thomas Fabius bought in 2012 a 280 square meter apartment in Paris for seven million euros. In June 2013, the French justice began there to investigate. Separately, running since 2012 an investigation into attempted forgery. Thomas Fabius is in both cases not heard before, said a source close to him.