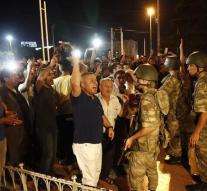 - Ankara Some offenders were arrested the coup in Turkey. This was reported Prime Minister Binali Yildirim by a spokesman for the presidential palace.

The leadership of the Turkish army to return given back all military command to the barracks. Or the military to instruct hearing is unclear.

Yildirim said the perpetrators of the coup,, traitors'. He called the people, just as it did President Recep Tayyip Erdogan, to take to the streets and demonstrate against the coup.,, Turkey is not a third world country '', said the Prime Minister.