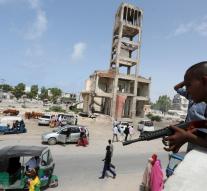 - The Government of Somalia is celebrating Christmas banned in the country. The security forces have been given strict instructions to put an end to Christmas celebrations they encounter.

We are a Muslim country and there is no tolerance for such un-Islamic parties , proclaimed Minister of Religious Affairs, Sheikh Mohamed Kheyrow, Wednesday for the microphone state broadcaster Radio Mogadishu.

Many homemade Christmas trees and nativity scenes the security services will probably not encounter. The vast majority of the population in the East African country hangs Sunni Islam.