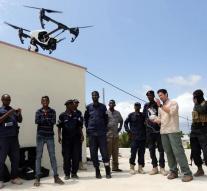 mogadishu - The Somali police can launch drones for the first time in the hunt for suspects. A former US intelligence expert has donated five unmanned airplanes to the authorities in the East African country.

This Brett Velicovich (33) suspects that the use of drones attacks can be prevented. 'They can be used for surveillance tasks,' he said. For example, the devices can look forward to extremists of al-Shabaab who want to attack attackers from the roofs.

The police in Mogadishu are already training with the unmanned airplanes, which are of Chinese construction. Some of the devices feature night vision equipment. The largest has a range of 7 kilometers. The Somali police believe that the aircraft can be useful, for example, to detect suspects after attacks.

The government of the stray country is dependent on foreign aid for the purchase of such equipment. President Mohamed Abdullahi Mohamed said in a Friday interview that his government is so tight at the cash desk that he has not received a salary since his appointment in February.